We have talked about eSports before, but it is never enough to document the promising growth of eSports as a novice and attractive industry.

Nowadays, many schoolchildren put in “videogamer” as an option for their future career, and trust me, they know the deal. A few eSports streamers reel in about $5,000 per month, but those are top-tier. With all of those sources of income combined, the average pro player takes in around $74,000 a year.

Moreover, according to Newzoo's report about eSports and the live streaming market, the eSports industry is expected to reach the $1.084 billion mark in 2021, which translates to a more than 14 percent growth for the eSports industry, which generated $947.1 million in revenue last year.

As the audience of eSports grows as well, Newzoo anticipates that the eSports industry will make $833.6 million -- more than 75 percent -- from their media rights and sponsorships due to an increase in the eSports live streaming audience.

Behind the Twitch and Douyu Streams

Much like conventional sports, eSports popularity growth is driven by viewership. Live Streaming plays a significant role in the gaming and eSports ecosystems. And last year, the pandemic disrupted the eSports and live-streaming markets alike, resulting in spiking viewership across all platforms.

eSports are generally live-streamed via platforms like Twitch, Youtube, Douyu, and Huya. These platforms also flourished as social hubs for many consumers, resulting in 11.7% growth caused by the increased time spent at home and social distancing requirements during the pandemic.

While the eSports market faced more challenges, it also managed significant growth, with markets and regions that previously had little-to-no eSports activity suddenly entering the scene and flourishing.

The latter is what the eSports market is all about. However, live streaming around non-organized competitive gaming is an exciting industry full of its very own developments and famous figures. Gamers live broadcast themselves playing online, and they gain some kind of celebrity status in the industry.

Even though the two industries differ by audience overlap, content, and monetization strategies, the lines are beginning to blur.  For example, popular streamers are competing in pro-level eSports more often, and some tournaments allow their competitors to live-stream themselves competing.

The eSports ecosystem is complex and varied. Thus we have visualized it to make it more comprehensive. 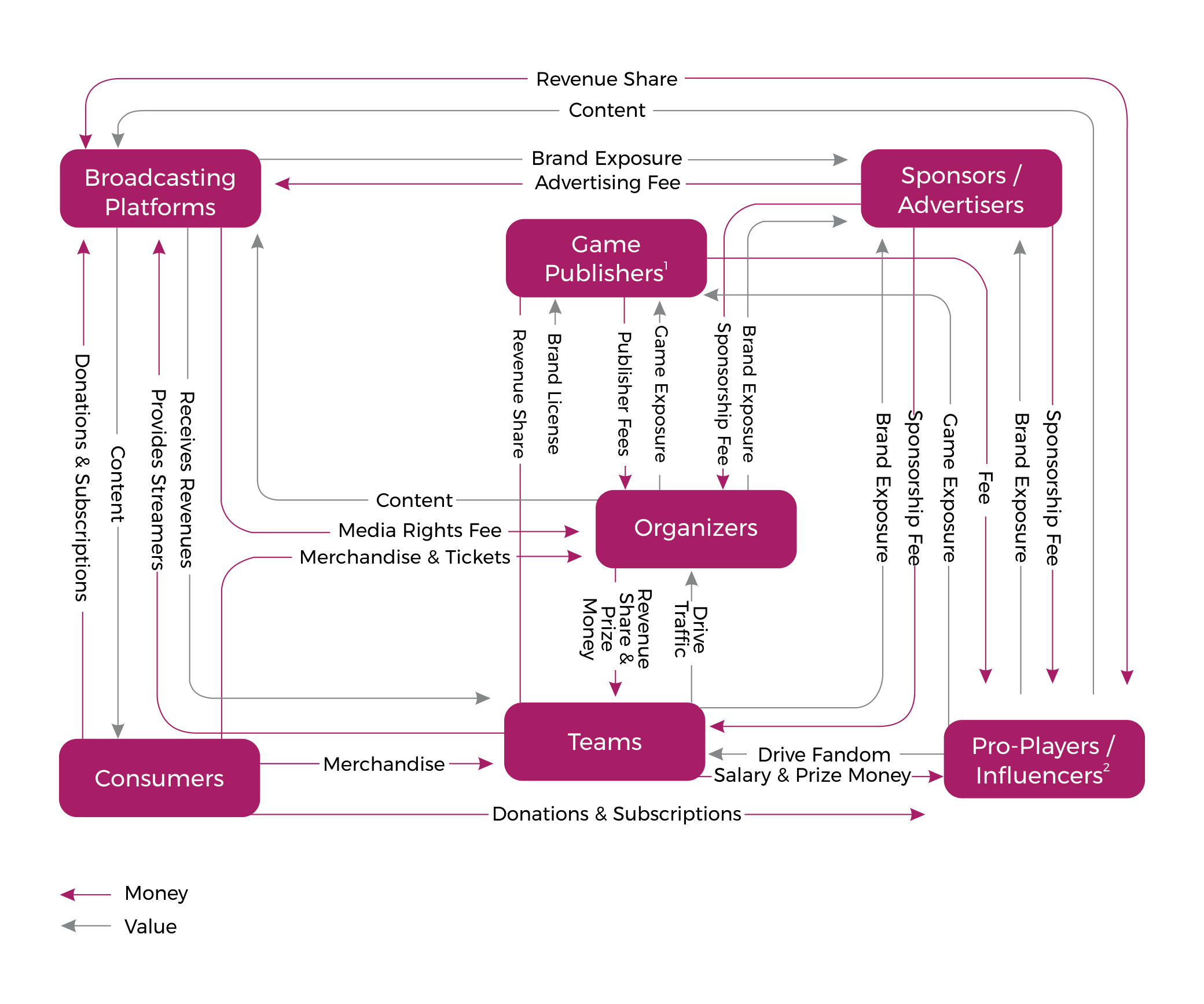 The infrastructure of eSports is expansive and expensive, with stadiums for individual teams, established leagues, dedicated game creating studios, and million-dollar sponsorship deals.

As an emerging industry, eSports is just starting to develop its infrastructure of stadiums and organizations. We’re here to help you navigate through this exciting world.

How a game, or video game, becomes a sport

The game becomes a sport when it meets several fundamental requirements.
The sizable differences between a game and a sport are accepted rules for gameplay, enforcement of those rules through a sporting league, and spectators.

Historically, eSports leagues were based on the relegation-promotion model like the soccer leagues of Europe. However, more recently, the league format for major eSports titles has been based on the model of professional sports leagues of the US. This classic city-based franchisee model has been adopted for games like Overwatch, League of Legends, and Call of Duty.

These brought sustainability to the ecosystem, making organizers, teams, players, and publishers more comfortable. The reason behind that is to help attract sponsors and investors with the expectation of longevity by reducing uncertainty, allowing multi-year contracts with sponsors, broadening team infrastructure, and targeted marketing.

Additionally, the players believe this brings more stability to their livelihood with annual salaries and benefits included in their contracts and will also accelerate the adoption of taking up gaming as a full-time career prospect which usually is looked down upon in society.

eSports would have gone down in the history books if fans didn't have a physical environment to match their energy and share that same environment with a digital audience. That is why live events help brands and fans to shine, and the broadcasting of those events accommodates the new style of viewership.

When we think about the system that supports eSports, we rarely focus on the brilliant teams behind the technology who animate characters, create storylines, and push the future of game development.

eSports is a massive industry, and it is growing by the day.  That is why it's no surprise to see that investors are putting more and more money into this field with diverse investment opportunities, such as:

Sponsorship offers a sizable opportunity for various brands to directly reach the target audience through offline and online media channels. Booths, posters, interactive advertising, video displays, freebies, and many other creative methods facilitate the brand to target millions of fans.

Many endemic brands and celebrities have already well-established sponsorship deals with eSports teams and leagues. These deals have proven to be a worthy investment and increase their market share and brand recognition.

Additionally, the industry has seen an up-stick from non-endemic brands such as Volkswagen Group, Daimler AG (Mercedes Benz), McDonald's Corporation, Tinder, and Vivo Communication Technology as crucial sponsors for the eSports tournaments and teams. There have been nearly 76 deals by non-endemic brands for Q1 2019, including prominent brands such as The Coca-Cola Company; AT&T Inc.; Nissan Motor Co., Ltd.; and Nike, Inc.

You can see names like Drake, Ashton Kutcher, The Weeknd, Michael Jordan, Steph Curry, and other celebrities investing in eSports.

Conclusion: eSport is Just Getting Started

The market for eSports is growing all the time. Many major brands are investing in this market already. There are always opportunities for other brands to invest in eSports and benefit from it. According to projections by the Newzoo research firm, the number of people who watch eSports should surpass 921 million in 2024. Brands should pay attention to how the market develops and consider how they can support it.

All You Need to Know About Esports Betting in 2021